Pin It
Earlier this year, I made Paula Deen's Baked Potato Soup. It is my FAVORITE soup recipe to date. With the cold weather recently, I decided to make it again. And then I also took it to a potluck for a bible study I'm in. Its always a huge hit. HOWEVER, the hardest thing I have found is actually taking the picture. How do you take a picture of a bowl of soup? For some reason this is a huge challenge for me.


Old picture...
New pictures from the last batch I made... 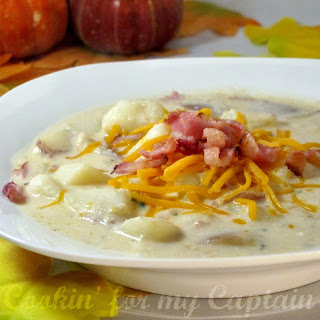 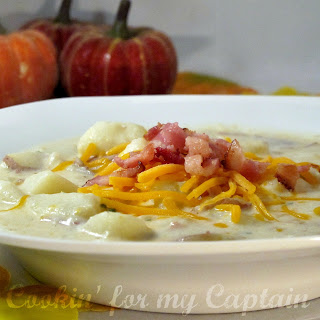 In a duth oven, cook bacon until crisp; remove and crumble, reserve drippings.

Cook onion in bacon drippings until tender; stir in flour and cook for one minute, stirring constantly. Gradually add chicken broth; cook, stirring constantly until thickened and bubbly. Put in the diced potatoes, parsley, bacon and half & half; cook for 10 minutes. Stir in cheese and sour cream.

Link up your soup recipes and show me how you've taken your pictures!

Please Do Not Feed The Animals. said...

This is funny as I took a photo of a soup I am blogging later this week and I have been pondering whether or not to do the post as my photo is just so rubbish!
So, I'll be checking back for the tips. :-)

Please Do Not Feed The Animals. said...

And, meant to say, your second lot of photos look great to me! Looks appetising - you see the lovely texture of the potatoes and the garnish really lifts the colour. My soup photos isn't anywhere as good as your first picture and that's your "before" so you are streets ahead of me.

I uploaded a bunch of my photos. As you can see, I kind of go hot and cold when it comes to taking good photos of soup. I think they look best on a slight above angle though. Your photo looks wonderful!!

I always load up on props for a soup photo because frankly, soup is rarely beautiful! your pictures look great though--I definitely want to eat your soup! :)

That looks really yummy. I love these creamy soups but they hurt the ole tummy so I must admire them from afar ;D

Soups are always difficult to shot.

I let mine cool so that there is no steam coming off before I add the garnishes. this way, they stay bright and colorful without wilting in the steam.

And for soup, it is usually all about the garnish. adds texture and breaks up the static look of the soup.

Yours looks terrific. Think you are being hard on yourself. i think the whole series really shows off the bowl.

Sorry i have not been around for awhile. Been really swamped, but as always, love your blog and hope to see you posting again soon. We are starting to get lots of hits for Thanksgiving dishes already. Got anything from last year you want to share???

How many does this recipe serve?