Pin It
I have tried many baked potato soups, and this one is by far the best.  I'm not really a "soup"  person, but I'll eat the entire pot of this. Absolutely YUMMY. And the best part? It is sooooo easy! 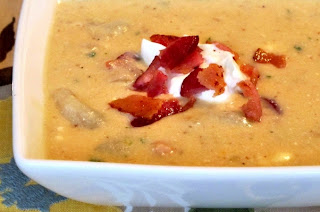 In a duth oven, cook bacon until crisp; remove and crumble, reserve drippings.

Cook onion in bacon drippings until tender; stir in flour and cook for one minute, stirring constantly. Gradually add chicken broth; cook, stirring constantly until thickened and bubbly. Put in the diced potatoes, parsley, bacon and half & half; cook for 10 minutes. Stir in cheese and sour cream.

Garnish with cheese, bacon and sour cream.
Created by Unknown

Thank you for submitting your recipe for our soup contest! Looks delicious. I hope to try it sometime soon :)

You’ll want to drink this soup. It’s SO GOOD!