Pin It
This recipe was givin to me from my best friend, Traci. My family just got back from "Silver Dollar City" in Branson, MO and I called Traci up and raved about the apple dumping SDC served [and partially famous for] and I just had to figure out how to make it. She then told me she and her mom JUST made the dumplings as well! She sent me her recipe and I tweaked it a little bit for my own twist on it. This is not a really easy dessert to make. It takes time, and patience. Don't give up--they are TOTALLY worth the mess it makes! 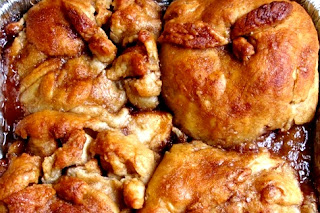 In a large bowl, combine flour and salt; cut in shortening until crumbly. Gradually add water, tossing with a fork until dough forms a ball. Divide into eight portions. Cover and refrigerate for at least 30 minutes or until easy to handle.

Roll each portion of dough between two lightly floured sheets of waxed paper into a 7-in. square. Place an apple on each square. Place 1 teaspoon butter and 1 teaspoon cinnamon-sugar in the center of each apple.

Gently bring up corners of pastry to each center; pinch edges to seal. If desired, cut out apple leaves and stems from dough scraps; attach to dumplings with water.

Place in a greased 13-in. x 9-in. baking dish. Sprinkle with remaining cinnamon-sugar.

In a large saucepan, combine sauce ingredients. Bring just to a boil, stirring until blended. Pour over apples.

Bake at 350° for 50-55 minutes or until apples are tender and pastry is golden brown, basting occasionally with sauce. Serve warm.

~~ When coring the apple, I didn't punch the corer all the way through the apple. This way, the buter and cinnamon mix didn't spill out the bottom.
~~ Make sure the dough is really cold before rolling out, this is the hard part (wrapping the apple) and the colder the dough, the less it will stick to the wax paper and your hands.
~~ The cinnamon sugar doesn't need to be measured exactly. I like using a bit more in each apple and on top--so play around with it according to what you like.
~~ Don't forget to baste while they are cooking--you don't want dry dough!
~~ Ice-cream is absolutely FABULOUS with this--make sure you have some on hand!
Created by Unknown

These sound really tasty. I love apple desserts. Thank you for including the extra tips, and linking up this recipe to Joy of Desserts.