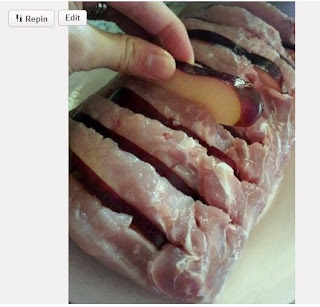 I have seen this particular "pin" many many times on Pinterest, and of course I pinned it to try it out. Lets just say, it was not a hit with the family. In fact, if we had a dog, I'm pretty sure the dog wouldn't want it either.

Maybe that was a little extreme. I love being able to taste the favors in my food, and this recipe had none. There was a "lot" of work put into it too--cut the slits, slice the apple, stuff the apple in the pork...cover with cinnamon yada yada yada. I was just really disappointed. It was awfully dry and apple did NOTHING for it. I could taste a little honey and cinnamon around the edges, but that was pushing the limits.

So what would I do differently? Not really sure that much could be done. Seriously.

I took a "pretty" picture before I let it cook.... 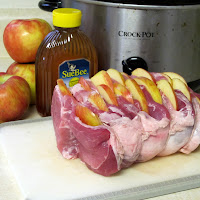 Anyone else try this? Have ANY luck??
Created by Unknown

About the closest I've come to trying something like this was pork chops and applesauce. But never to actually cook the apples in the pork. Thinking about it, I'd be more likely to say it might work. But hearing your results sounds like you did it right so I'll be steering clear of ever trying this one out.